ERATH COUNTY (June 18, 2015) — Meals on Wheels of Erath County is celebrating 20 years of feeding seniors in our communities this year and they’re inviting everyone to join them Friday night for the organization’s annual fundraising dinner, fun shoot and silent auction .

“This is the organization’s only fundraiser this year,” MOW Director Whitney Lee said. “However, other organizations will be hosting events that raise money to be donated to MOW, like Hunks of Erath County, which is always so much fun. But this is our only one to plan and host, and it’s two days of excitement really.”

It starts with a dinner at City Hall at City Limits in Stephenville on Friday, June 19, at 6:30 p.m. and continues Saturday, June 20, at Rough Creek Lodge in Glen Rose. During dinner, Lee said there would be lots going on including a silent auction with tons of great items to bid on, games, drawings and live music.

Things kick off bright and early on Saturday, with shooting groups gathering at Rough Creek Lodge at 8 a.m. for the fun shoot. Lee said each shooter will get 100 clays at 10-12 different stations. Prizes will be given for both individual shooters and groups.

“Rough Creek is great help with the fun shoot each year,” Lee said. “They give us a bit of a different course each time and set up different stations for the shooters. Everyone really seems to enjoy getting out there and competing.”

Shooters can register as an individual shooter or with a group of five or eight shooters. Registration cost is $100 per shooter, so $500 for the team of five and so on. Cost includes 100 clays and a ticket to Friday night’s dinner.

If you aren’t really a shooter, but still want to get involved in the fundraiser, Lee said there were plenty of ways to do that. From donating items to the silent auction, becoming an event sponsor or just by bidding on auction items and buying raffle tickets.

Lee said there were already some really great silent auction items donated, like tickets to different Texas Rangers’ games, four three-day passes to Rhymes and Vines 2015, tons of awesome baked goodies from local bakeries and even a four-pack of tickets to see the Great Divide, Cooder Graw and Cory Smith at Billy Bob’s this summer. MOW is also selling tickets for their annual gun raffle in conjunction with the fun shoot on Saturday. Those tickets are only $10 each or three for $20 and grant the holder to three chances to win! 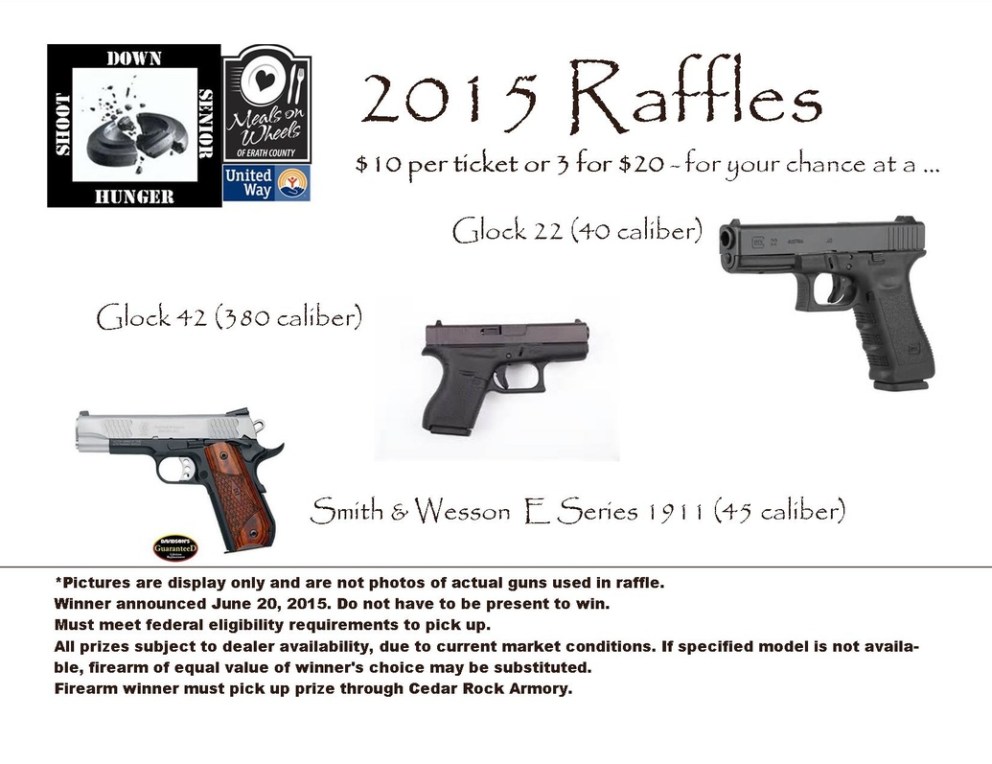 So be sure and get enough dinner tickets for everyone in your group! Individual tickets are $25 each and a couple ticket is $40. Tickets for dinner or for the raffle can be purchased at the MOW office (located at 1306 E. Washington, Ste M in Stephenville) or from any MOW board member.

Handsome hunks rock the house in support of Meals on Wheels