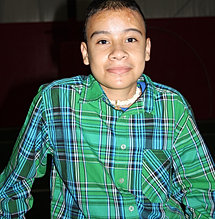 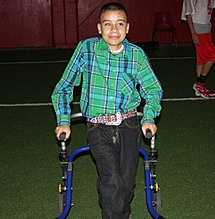 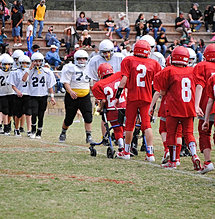 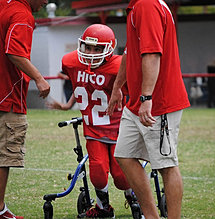 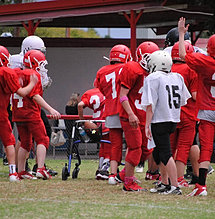 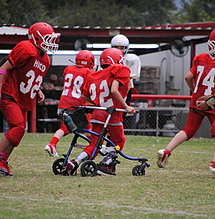 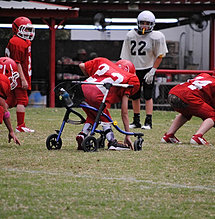 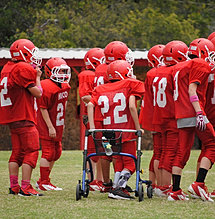 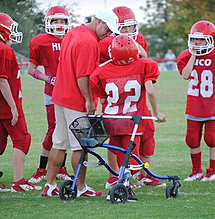 HICO (November 5, 2014) — Fernando Fonseca is all smiles as he rolls his walker along the carpeted indoor workout facility at Hico High School.

Why wouldn’t he smile? In Texas, boys who score in football games are heroes, after all.

“He might be the best kid in that whole class,” said Hico athletic director and football head coach Keith Wood, himself beaming as he spoke of Fonseca and all he overcomes on a daily basis just to attend school and keep a smile on his face. “He’s always smiling, it never stops. Everything with him is yes sir, no sir, yes ma’am and no ma’am. He’s just a great kid to be around. We love him here.”

Fonseca suffers from Spina bifida, which according to WebMD is a type of birth defect called a neural tube defect that occurs when the vertebrae don’t form properly around part of the baby’s spinal cord. Spina bifida can be mild enough to show little or no symptoms, but Fonseca’s case is more severe.

“He has to have the pressure in his brain relieved,” Wood explained. “It’s crazy all he has to go through just to be here.”

But Fonseca doesn’t stop at just being there. He chooses to excel.

“I want to be a doctor when I grow up because I like helping people,” said Fonseca. “Lots of people help me, so I want to help other people.”

His classmates from Hico helped him put two points on the scoreboard in last week’s seventh grade game at Tiger Stadium, and his foes from Goldthwaite showed their good sportsmanship by playing along.

Following a Hico touchdown, Fonseca, rolling walker and all, took a handoff and “rushed” straight up the middle. The Goldthwaite defense, of course, didn’t press the issue, and Hico’s offensive line simply formed a wall in front of Fonseca, guiding him into the end zone for a score few who witnessed the play will ever forget.

“It was a lot of fun and exciting,” said Fonseca in his youthful, high-pitched voice. “I thought they were going to tackle me, but they didn’t and I scored. It was exciting to get to participate in a game.”

Fonseca says football and baseball are his favorite sports and he plans to stick by both programs throughout his school years.

“Everybody on the team is my best friend, and I’m excited to be in the seventh grade and just to hang out with these guys,” Fonseca said.

Wood said Fonseca has always strived to participate, even when it meant joining classmates in a group punishment.

“A couple years ago, we had a coach whose elementary P.E. class was being a bunch of turds one day, so he had them in here pushing 25 pound weights,” explained Wood. “I came in here to see what was going on, and there’s Fernando pushing a weight along just like the rest of them. I told him I didn’t think he was the one who caused the trouble and that he didn’t have to do it, but he said if the rest of the class had to do it, so did he.”

“He likes everybody and everybody likes Fernando,” Wood said. “He’s one of those kids you’re just drawn too, and when he succeeds you can’t help but smile real big and be extra proud.”

Wood said the coaches never set out to get any attention when they propositioned Goldthwaite regarding the matter.

“We didn’t do it for attention, we did it for Fernando,” Wood said. “We did it so he could participate and have the chance to do something a lot of boys his age take for granted.”

For one night, the most unlikely of students became the teacher, and everyone attending the junior high football game was taught a valuable lesson: It’s not always who wins or loses, but who gets to play the game.

By BRAD KEITH TheFlashToday.com STEPHENVILLE (November 1, 2016) — For the first time in school [Click for more]

By BRAD KEITH TheFlashToday.com STEPHENVILLE (Sept. 2, 2016) — There were 106 combined points and [Click for more]

This site uses Akismet to reduce spam. Learn how your comment data is processed.